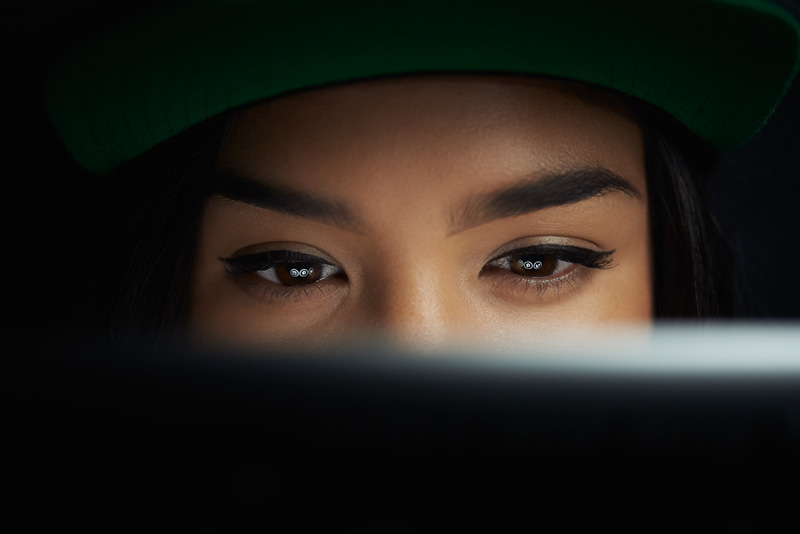 I’m always on the look out for amazing people who are living life powerfully. Jordan Mychal is one of those people.

Living Life Powerfully is a personal project of mine. It’s an opportunity for me to share the stories and lessons people who are following their passion.

Jordan is a social media maven and I’m very lucky to get to work with her everyday (well not on weekends). I had this idea for a photo shoot that I thought she’d be perfect for.

The concept was to take a series of portraits that were lit using only Apple iPads. I wanted to light Jordan using the very implements she uses to do her job (and what she loves). I put together a mood board, gathered some assistants and we went to work.

During the shoot, we ended up using most iPads, but also used an iPhone and Macbook Pro for certain shots. The nice thing about using continuous lighting was that you could see the effect of the lighting precisely. It also helped that I was tethering through Capture One (my first time using the program).

It was actually after the photo shoot wrapped that I realized that Jordan would be perfect for this project. Not only does she love what she does, but she is excellent at it. I’m often in awe of her knowledge and intuition at work.

Look Behind the Scenes >

Faced with the unknown

Things could have turned out differently for social media maven Jordan Mychal. Not so long ago she was at a proverbial fork in the road. Faced with the opportunity of pursuing a cushy corporate job in recruitment or taking an entry-level retail job, she had to make a choice.

Her choice came down to choosing something safe, or choosing the unknown. The unknown was with a retail company named lululemon athletica. Jordan was attracted by the culture, but had not idea what that leap might be like. The main stumbling block she faced was that her parents had funded her tertiary education and here she was contemplating a career that didn’t connect to what she had studied. The turning point was when she was able to drop the expectations she believed her parents had for her.

Thing is, those expectations were purely created by Jordan, not her parents. In fact her mom is her biggest supporter. She is trusting, level-headed and good at grounding Jordan when she feels out of control. She creates a space where Jordan believes that whatever she chooses will be the right thing. We all need someone like that in our lives.

Jordan chose the unknown and started working at the lululemon athletica store in Adelaide. She looks back at this as pivotal living life powerfully and getting to do what she loves everyday. It all came down to her view that “you spend so much of your life working that you may as well spend it doing something you love.”

You might think that Jordan is a natural risk-taker and revels in the unknown, but that’s not the case. By nature, she would prefer to be planned and ready for everything. Just like most of us, she gets stuck in the unknown. What she has realized is that looking back, following the path to the unknown has never resulted in negative results for her. She still has days when she doesn’t feel powerful, sleeps in late and watches YouTube videos all day, but she now looks at the unknown as something that may be uncomfortable, but is necessary for personal growth. So instead of dwelling in the discomfort of the unknown, she moves into action and pulls herself out of it.

That initial step into the unknown (which maybe would have never happened if there hadn’t been a glitch in the job posting system that allowed Jordan to see the job before it was released) has led Jordan on an amazing journey through the store, to managing the guest education centre to her current role owning all of lululemon athletica’s social channels in Australia and New Zealand.

Now Jordan is lending her expertise to small businesses and small start-up companies while excelling at her full time day job. She gets jazzed by making a difference for people because for her, it’s all about relationships. She admires people who are passionate, in action around their goals and take risks in creating what they’re committed to. Her ultimate goal is to lead a life that’s full of discovery and ever-evolving.

Connect with Jordan if you’re interested in working with her. She’s a wonderful human being.

How I found Jordan

Jordan wasn’t hard to find. She sits two desks away from me. We both work for lululemon athletica in Melbourne, Australia on the Brand team.

Before I came to sit so close to Jordan, my first interaction with her was fittingly over Facebook. I had just completed making a video about my goals for a job application. She saw the video and reached out to me to tell me how great she thought it was.

Little did I know at the time that a few months late we’d be co-workers. Pretty amazing how things happen.

Brett Campbell of Goatpen Media, Yoska of Humans of Australia, Fatima and Rachel Jane of Rachel Jane Photography and Two Loves Studio for being willing assistants during this shoot. Without their help this project would have never come to fruition. Through their generosity did it come to life.

Thank you so much for reading and having a look at her story. I hope that you’ve found something within it that you can connect with in your own life and that it inspires you to get into action, take a risk and follow your heart.

I’ll be sharing some behind the scenes photos as well, so stay tuned for that.

Have a wonderful day,

Rachel Jane | Food Photographer »
We use cookies to ensure that we give you the best experience on our website. OkRead more