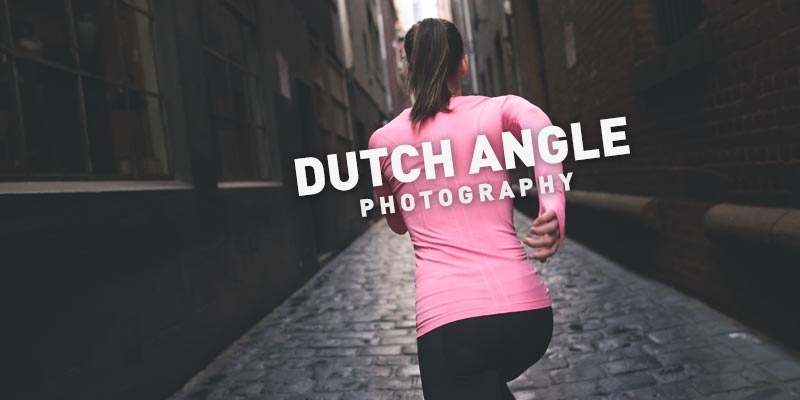 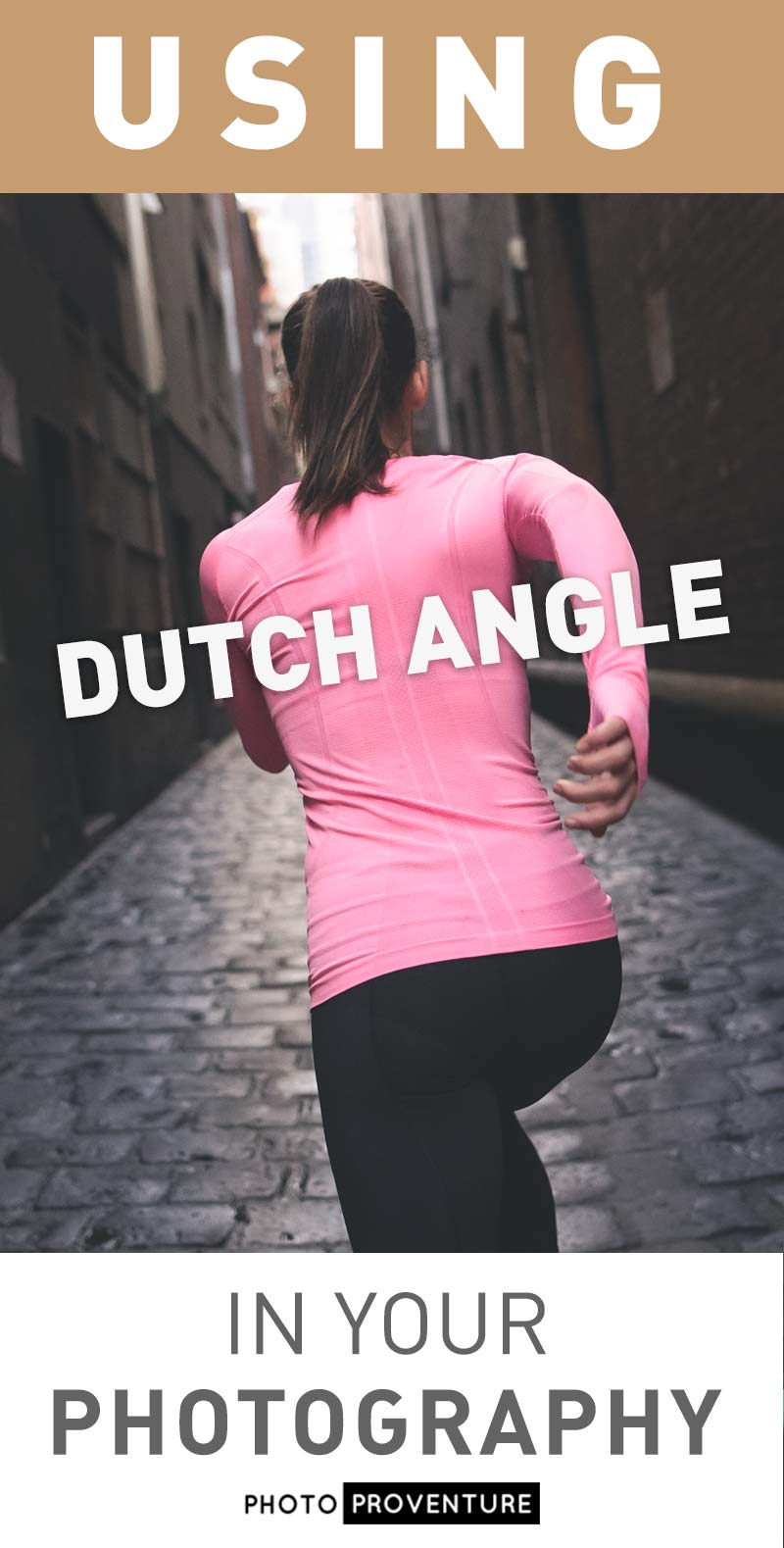 If your photo has angled horizon or vertical lines then you’re either doing dutch angle photography with purpose or shooting crooked. If you want to know more how to be in the former category rather than the latter, read on.

So we’re on the same page, here’s what I mean when I talk about Dutch angle:

When the photograph is intentionally composed so that the horizon is not parallel with the bottom of the frame or the vertical lines in an image are at an angle to the sides of the frame due to the camera being tilted on it’s side to side (not front to back) axis. 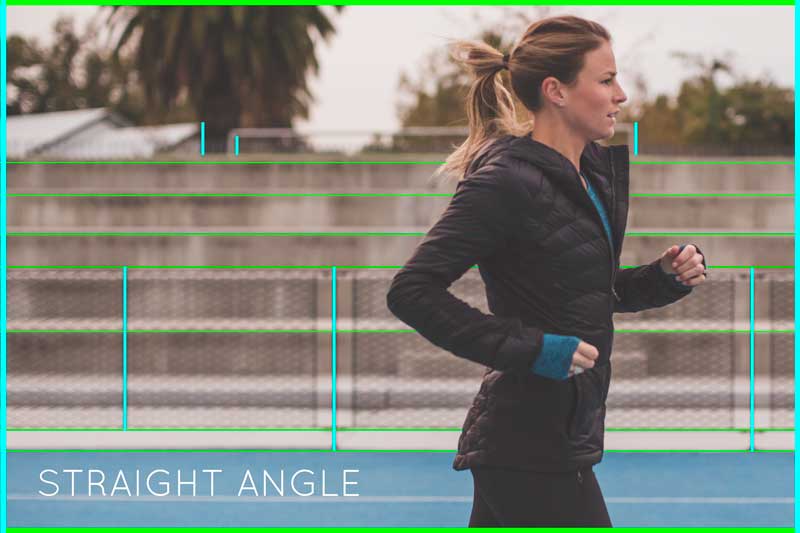 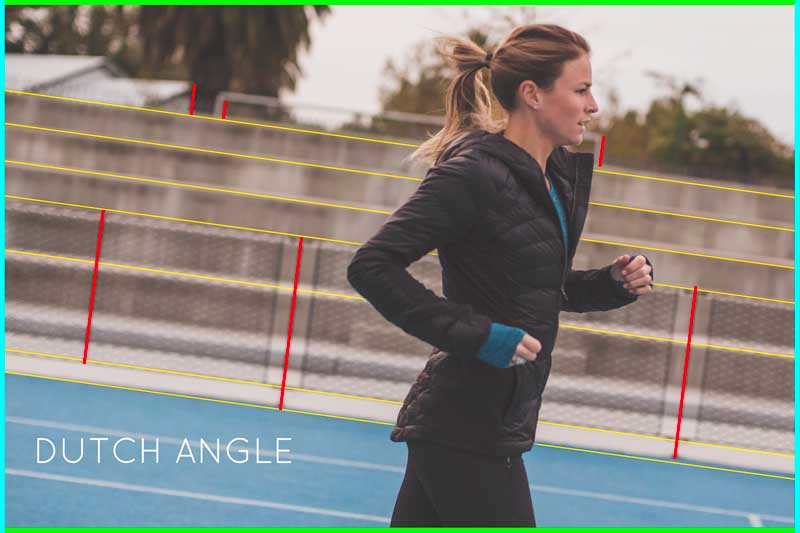 These angles are also used in cinema. Here’s a quick example someone put together of how the cinematographers use dutch angle in the movie Thor (ignore the cheesy music):

How do you know if your image is a Dutch Angle photo or just crooked? Consider that it’s all about your intention.

Here’s how you know:

If those don’t apply, then my guess is that you’re “dutching” by accident. Accidental “dutching”  can lead you to using a Dutch angle to strengthen your image but I suggest you fix your crooked image first and then Dutch on purpose.

In this first shoot with the Canon 1DX Mark II, I decided to run behind Olivia with a 24mm lens to get a shot where you feel like you’re running with her. 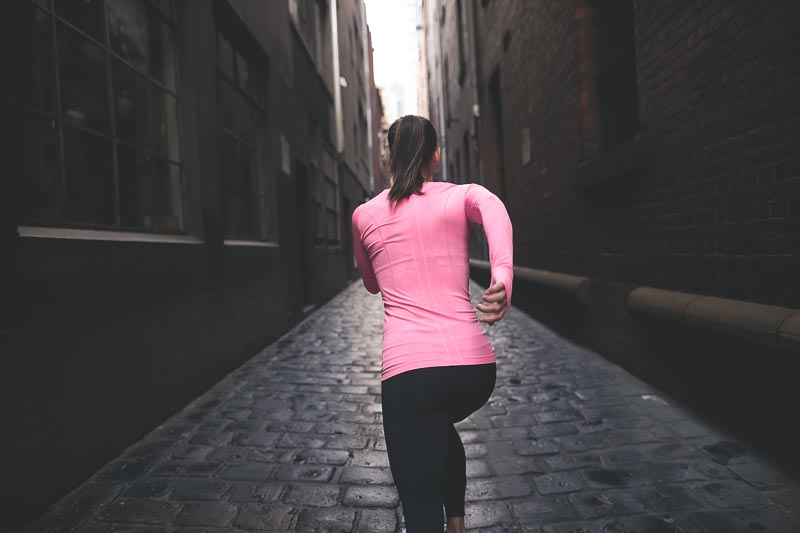 Notice that this original image already has a slight tilt to the left because it’s hard to keep a camera level when you’re running! Since this wasn’t a conscious choice at the time, I straightened the image first. 1/1000 sec at f/2.0, ISO 3200.

How often do you get your horizons perfectly straight at the time of capture?

If you’re like me, this actually happens quite often. I don’t work on a tripod and my images can vary any where between completely straight, slightly dutched and what I call “all over the place”. If you always get your horizons straight, you don’t have to think about the next question.

How often do you edit your files to try to fix your horizons and vertical lines?

I suggest that the answer to this question should be: always. A key word in the question above is “try”. Sometimes straightening the image takes too much away, or crops out a body part in an awkward place. I still go through the process to fix crooked images so that I know what they look like straight. 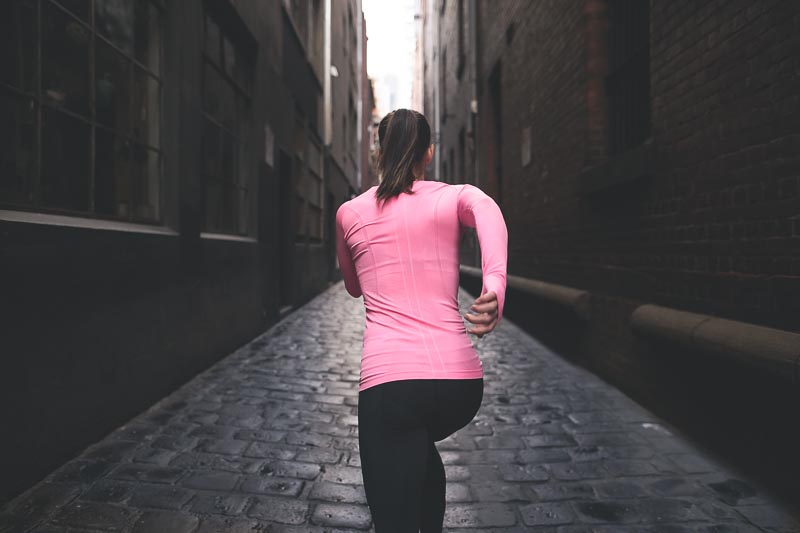 I used the “auto upright” function in Lightroom to straighten the image. I feel this looks better than the original that is just slightly dutched, however it doesn’t have as much movement in the frame because it feels like the shot was taken on a tripod.

This is a pretty easy process most of the time. A straightforward (no pun intended) way is to use a ruler tool combined with cropping. 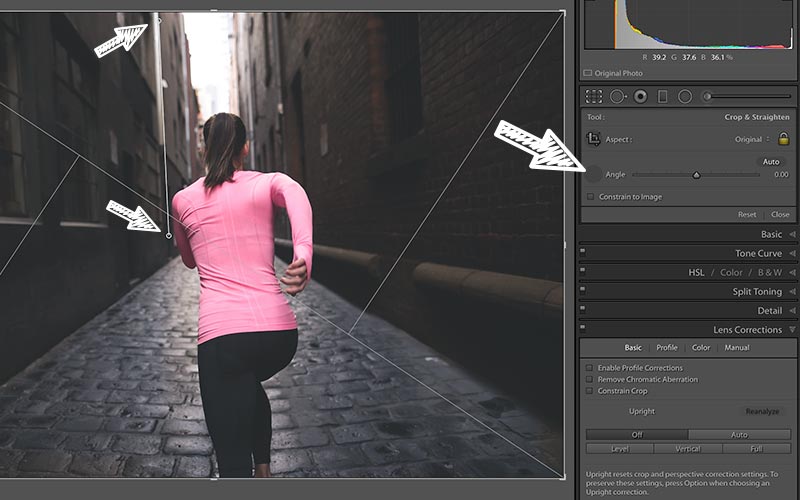 To use this tool in Lightroom, open up the crop tool and click on the ruler icon (where the arrow is pointing on the right). Then choose a line that should be vertical and drag the ruler to make the line parallel to it (two small arrows on the left). The program will take that line and make it parallel to the edges of the frame resulting in a straight image. In this case the correction angle was 3 degrees. This can also be done with horizontal lines like the horizon.

The process may be slightly different in Adobe Lightroom and CaptureOne (affiliate links), but both have this type of tool.

Another quick way to do this in Lightroom is to use the “Auto Upright” tool. It doesn’t always work, but when it does, it’s a quicker way to get similar results. 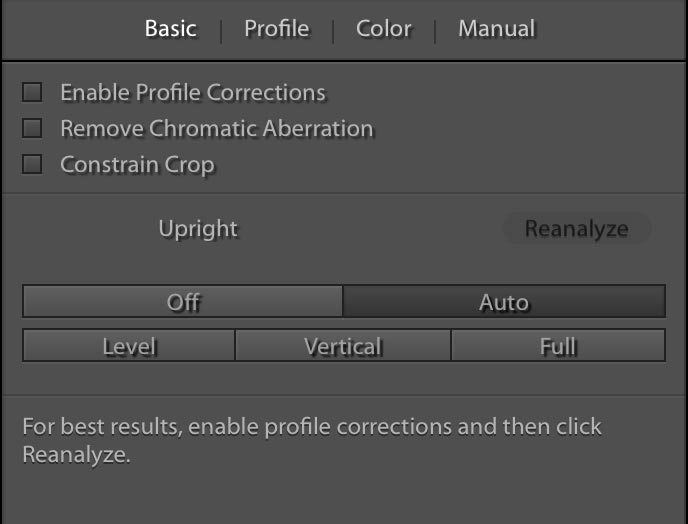 All you have to do is hit the auto button (and keep your fingers crossed). Sometimes this feature distorts an images in ways you don’t want it do, so it doesn’t work in all cases.

Although there are no rules, I do have some guidelines that I use based on my own experience (exact degrees are for illustrative purposes):

Since these angles are so close to straight, I don’t think they work. Instead of looking intentional, they look sloppy.

That’s because the viewer will be able to tell something is off, but is likely wondering if I meant to meant to angle the image. I’d rather not have my viewer wondering about that.

These angles are noticeable enough that the viewer would reasonable surmise that I did it on purpose.

I tend to use these medium angles to accentuate movement. It gives the entire frame a sense of action. 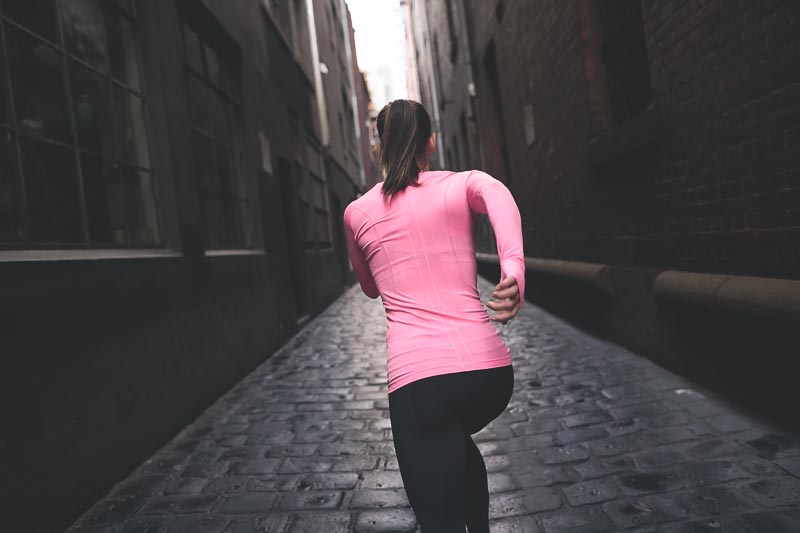 I decided to go with a Dutch angle of 4 degrees to give the frame more movement and make it feel like the viewer is running behind Olivia.

Deeper angles add movement and can also add a sense of unease to the image. If I was shooting an image where I wanted the viewer to feel uneasy, I would accentuate this by dutching the image significantly. However if my subject wouldn’t benefit from this added unease, I would avoid dutching to this amount.

I don’t tend to use a lot of deep Dutch angles as it doesn’t align with my style very often. 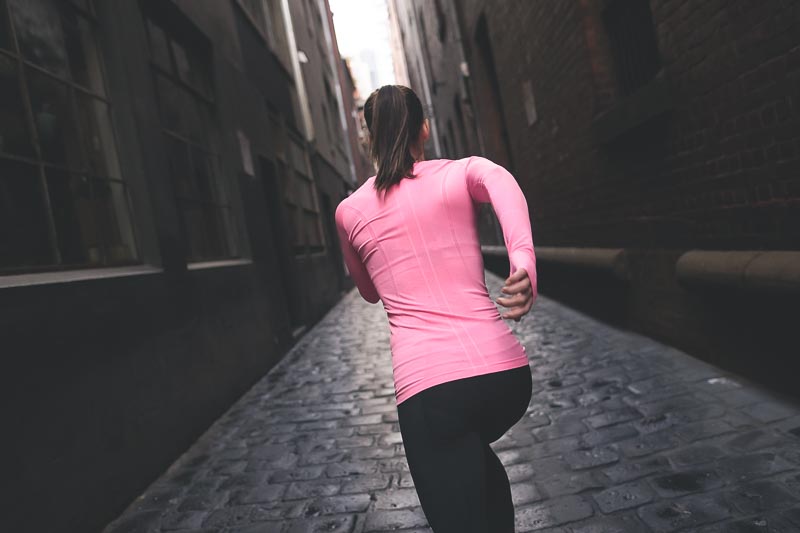 This image is dutched almost 8 degrees from straight. Notice how it feels different from a medium level Dutch angle above.

Here’s what the image above would look like if I went 8 degree the other way: 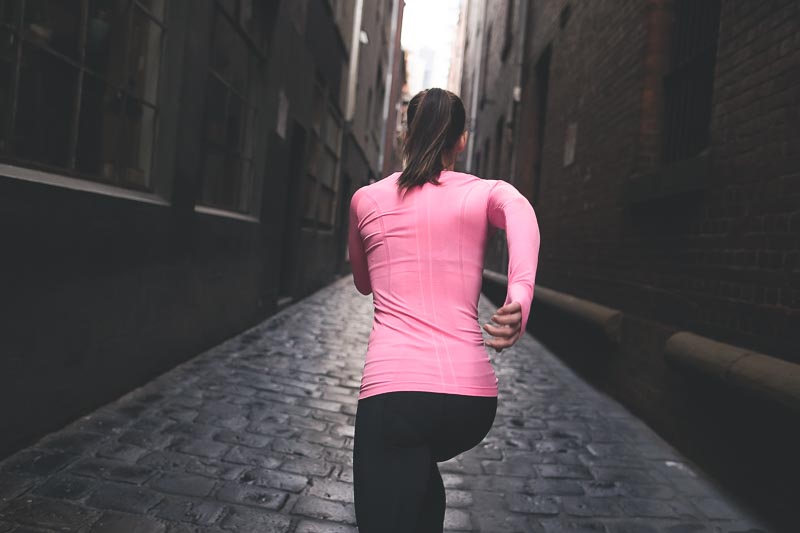 This image was angled over 8 degrees the other way to demonstrate how the direction you dutch will impact your final image.

For me, angling this photo the other way makes me feel more uneasy. Maybe it’s because her body is almost vertical while the background is very skewed. In this photo of Olivia, she was already leaning a bit to the left while running, so tilting to the left made the image feel more natural than if I had tilted to the right.

My advice here is that angling the photo in a way that follows the natural angle of the shot will get a more natural result, while going the other way will create more unease.

At the end of the day, you’re the artist. It’s really up to your personal taste on when and how to use a Dutch Angle.

If you try this technique and would like feedback on the results from a supportive community, please join the Photo Proventure Community on Facebook. 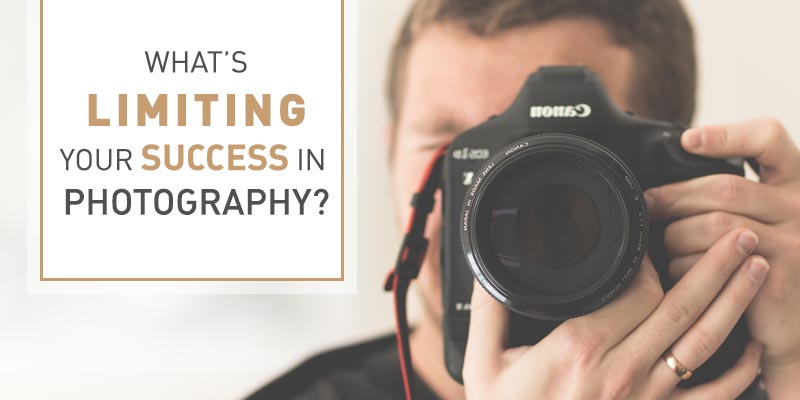 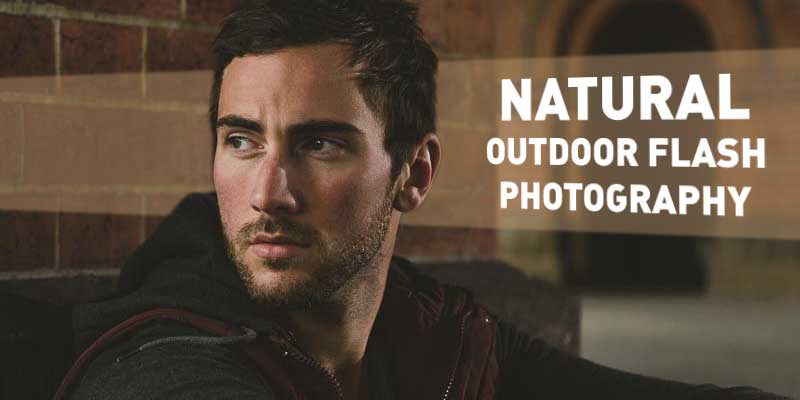 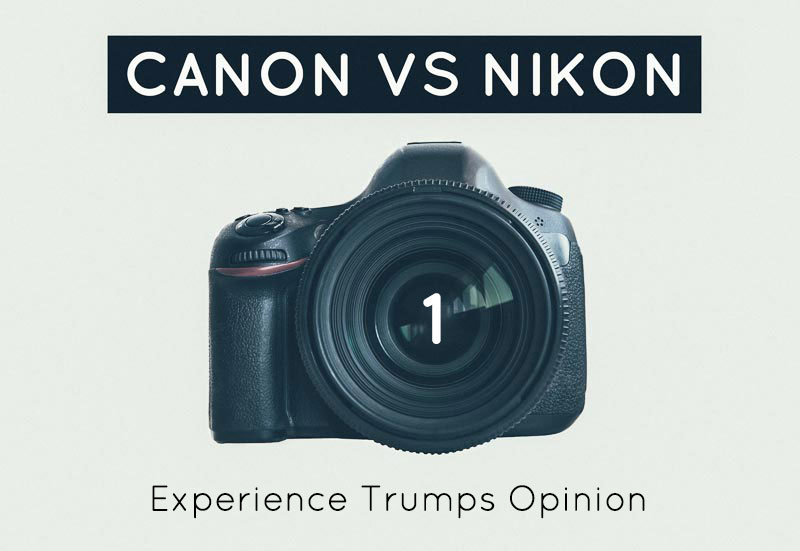